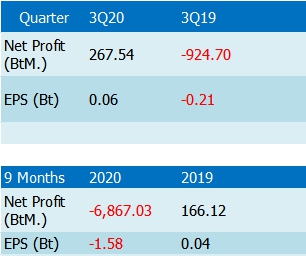 SPRC reported a net profit of 267 million baht for the quarter, contrasted to its net loss of 924 million baht in 3Q19. The increase was due to SPRC’s higher gross profit, supported by lower cost of sales and higher foreign exchange.

However SPRC’s EBITDA and net earnings in 3Q20 were higher than 3Q19 due to higher accounting gross refining reflected from a stock gain due to the increase in oil price during the quarter while oil price decreased during 3Q19 which resulted to a stock loss and consequently resulted to negative earnings in same quarter of last year.

When compared cost of sales for 3Q20 with 2Q20, cost of sale increased 35%, which was in line with the increase in sales revenue but in a higher proportion due to lower product spread over crude cost. Comparing 3Q20 to 3Q19, cost of sales decreased 31%, reflected from lower average cost of crude oil and lower sales volume in this year.