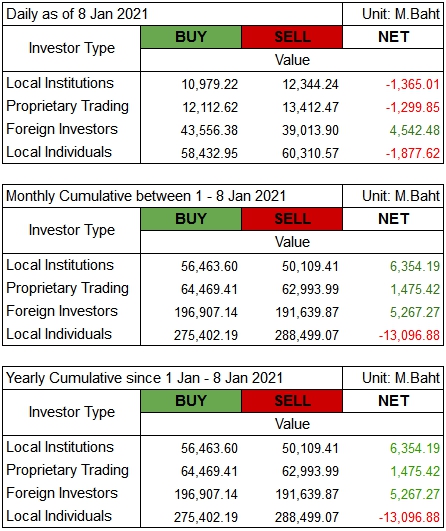 – SET Index closed at 1,536.44 points, increased 22.66 points or 1.50% with a trading value of 125 billion baht. The analyst stated that the Thai stock market closed higher, in line with regional markets as well as the European markets after the U.S. Congress officially confirmed Joe Biden’s win as the president, while the Democrat would own both the Senate and the House, leading to a positive sentiment of more and smoother stimulus plans.

However, the buying pressure on DELTA greatly impacted the Thai market outlook today, while some took the opportunity for a profit-taking, especially in the banking sector.

In addition, the analyst still believed that SET Insex could still be able to extend its gain, even with some selloff during the climb, giving a support level for next week’s sessions at 1,510-1,520 points and a resistance level at 1,550 points.

– Foreign Investors were a solo buyer in today’s session, buoying SET Index with a total of 4.5 billion baht of net buy.