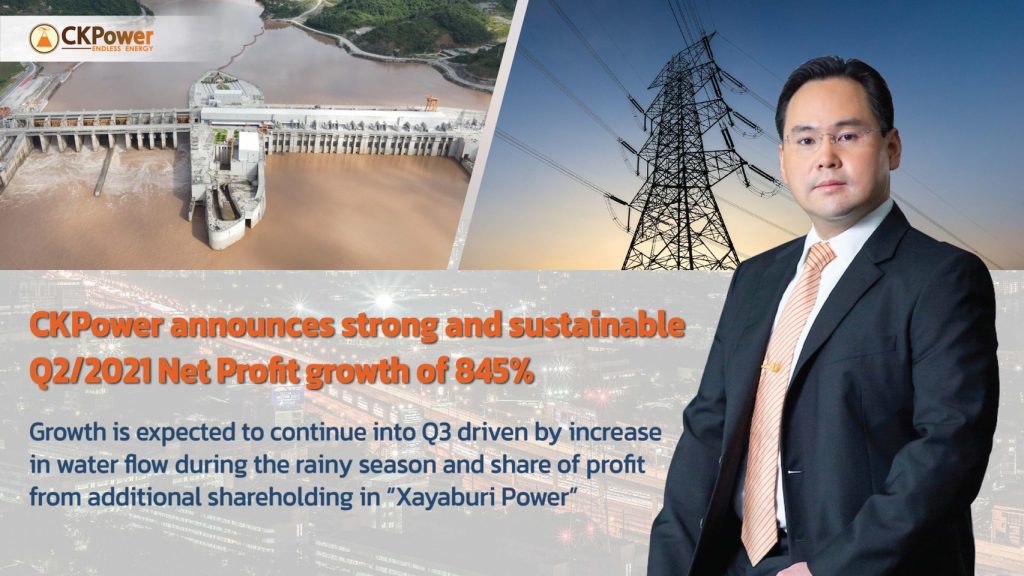 The increased revenue was driven by higher electricity sales due to greater reservoir inflows during the first half as well as higher water storage levels at the start of 2021 compared to the same period last year.

Furthermore, CKP earned a year-on-year increases in the share of profit from its investment in the Xayaburi Hydroelectric Power Plant (XPCL) of Baht 616.9 million or 626.3% in 2Q21 and Baht 915.6 million or 208.5% in the first half of 2021, which were primarily attributed to greater average water flow rates through the Xayaburi Hydroelectric Power Plant compared to the same period of the previous year, boosting sales of electricity, and to a decrease in XPCL’s financial expenses due to a decline in interest rates from the previous year and loan principal repayment.

Mr. Thanawat said that in addition to strong Q2 performance, CKP issued Baht 4,000 million debentures on May 28, 2021 with the proceeds intended for the rollover of its debentures that were due in 2Q21, for asset acquisition and investment in ventures related to the Company’s businesses, as well as for use as working capital in CKP’s operations.

The debentures were given a credit rating of A-/Stable by TRIS Rating Company Limited. Furthermore, on June 29, 2021, CKP purchased an additional 5% share of XPCL as approved by the 2021 Annual General Meeting of Shareholders with a Baht 1,800 million short-term loan facility as source of fund, increasing its shareholding in XPCL from 37.5% to 42.5%.

The strong performance is expected to continue into Q3/2021 as a result of an anticipated year-on-year increase in NN2 and XPCL’s electricity output as NN2’s reservoir inflows and the Mekong water flow rates through XPCL are forecast to continue to be higher than the previous year. In addition, XPCL has been able to produce electricity at maximum capacity since mid-June. The performance will also be driven by the fact that CKP is set to begin recognizing the increased share of profit from XPCL following the additional 5% shareholding from Q3 onwards.

With regard to COVID-19, the production of all CKP’s power plants have not been affected as Business Continuity Plans (BCPs) have been prudently prepared to handle such events and manage risks that may impact the Company’s operations.