– SET Index closed at 1,628.04 points, increased 4.20 points or 0.26% with a trading value of 73 billion baht. The analyst stated that the Thai stock market moved in both positive and negative territory in today’s session, even though the announcement of U.S. inflation rate was positive for the market, the Chinese economic data signalled for a slowdown, which affected Asian markets.

The speculation on mid and small-cap stocks and the reopening plays was able to buoy SET Index today, but the pressure on big-cap stocks such as DELTA, INTUCH, MAKRO and LHFG still pressured the market due to concerns over new freefloat measures.

In addition, the analyst expected SET Index to continue moving in positive direction tomorrow, giving a support level at 1,615-1,620 points and a resistance level at 1,643-1,660 points.

– JP Morgan’s derivative call warrant DJI41C2109A with underlying Dow Jones ($5) Futures September 21, suspiciously saw a movement in price of over ~1000x on opening. The DW jumped to THB 27.25 right after the morning session started and quickly dropped to THB 1.0 six minutes post opening of the market.

– The Thai cabinet approved 2 trillion baht in stimulus to attract one million wealthy foreigners. These measures aim to promote foreign direct investment by offering long-term visas and tax benefits to “high potential” foreigners and easing some limitations on foreigners owning property and land in the long run.

– Asia Wealth Securities recommends short-term speculative investments as the Thai market will continue to fluctuate due to concerns about changes in monetary policy, recommending Global, Oil and Re-Openings Plays. 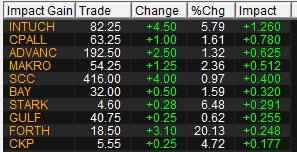