PTT Exploration and Production Public Company Limited (PTTEP) has announced its 3Q21 consolidated financial statement through the Stock Exchange of Thailand as follows; 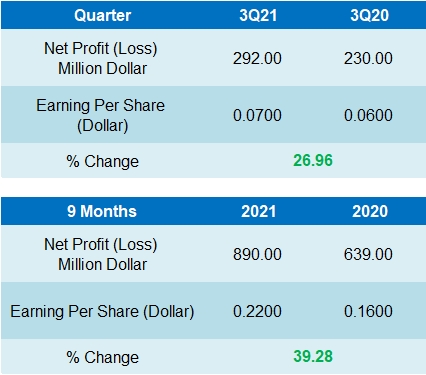 Additionally, there was a change in loss on financial instruments of 32 million dollars since the Group recognized loss of 5 million dollars in this quarter which mainly came from loss on oil price hedging instruments due to an upward trend of forward oil price, offset with gain on foreign exchange forward contracts since Thai Baht was depreciated against USD.

However, 3Q20 recognized gain of 27 million dollars, primarily from foreign exchange forward contracts due to the depreciation of Thai Baht against USD.

The company stated that Dubai crude price in 3Q21 increased to an average of 71.68 USD per barrel, slightly higher than 2Q21 at an average price of 66.9 USD per barrel. The increase in prices was from the recovery of global demand that outweighed supply increase resulting in global crude oil inventories to fall below the 5-year average.

On the demand side, economic stimulus packages by governments, lockdown easing and travel seasons in the U.S. and Europe, together with all-time high gas prices that prompted consumers to switch from using gas into oil, had led to demand recovery in 3Q21. However, COVID-19 Delta variant spread in Asia where vaccination rate was moderate, urging many countries including China to enforce lockdown measures resulting in lower regional crude demand.

PTTEP expects the average sales volume for the full year of 2021 to be approximately 417,000 barrels of oil equivalent per day. The sales volume growth in 2021, compared to the previous year, was mainly driven from the start-up of Malaysia Block H Project and the acquisition of 20% interest in Oman Block 61 Project, which the transaction was completed on March 23, 2021.