– SET closed at 1,624.84 points, increased by 10.72 points or 0.66% with a trading value of THB 51.46 billion. The positive sentiment of domestic political issue that began to form the government to be more realistic buoyed the market to edge higher. Currently, the Speaker of the House of Representatives is Chuan Leekpai from Democrat Party and Suchart Tancharoen from PPRP as the first deputy speaker and Suphachai Phosu from Bhumjaithai Party as the second deputy speaker of the house representatives.

Moreover, the regional equity markets were supported by the visit of the U.S. President Trump to Japan, where he earlier said Tokyo has “had a substantial advantage” over Washington for “many, many years.”
– Institutions and Proprietary Trading net bought at THB 2,398.95 million buoyed SET to 10.72 points while individual net sold at THB 2,077.52 million.
– MINT filed a complaint, demanding AOT to reconsider the Qualification Process.
– “Peerapong” put ฿1.5M. in BEAUTY’s shares, regaining investors confidence.
– PACE to finalize with capital increased through RO to solve “C” sign.
– AOT’s “Nitinai” confirmed a fair qualification process of Suvarnabhumi commercial area concession, keep eyes on the possibility of MINT going to court. 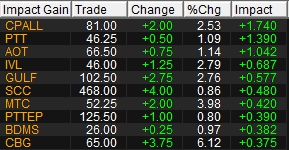