– SET closed at 1670.41 points, increased by 0.70 points or 0.04% with a trading value of THB 44.22 billion. Thai Market has been slowing down after increasing to respond to the interest rate cut of Fed. The less concerned of government forming and the successful trade deal between the U.S. and Mexico reflected positive sentiment which brought the investors to return to invest in the Thai market again.

– Investors plunged BEM 6% for profit taking after gaining 54% in 52W while SET plunged 3%.

– BEM fell 5% and closed the day at THB11.40/share, the highest was at THB11.90 and the lowest was THB11.30 with a trading value of THB 2.95 billion. The fall might due to the profit taking from investors as the price advanced nonstop and surpassed analysts’ consensus target price which is ฿11.60/share. Furthermore, there was a rumour about the scraping of expressway concession by BJT’s “Anutin” circulates.

– CPN invested THB1 million to establish “CPN and HKL” to study the development of the mixed-use project. 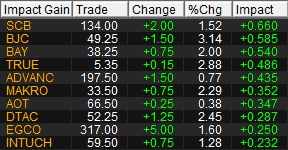