– SET Index closed at 1,352.37 points, increased 9.52 points or 0.71% with a trading value of 65.1 billion baht. The analyst stated that the SET Index continued to rise, in line with regional markets, after China announced a better-than-expected PMI for May, indicating a potential recovery in post pandemic.

However, SET Index lowered its gain in the afternoon after the report of China halting import of U.S. farm products as the country is evaluating the escalated tension between the two countries.

– Foreign Investors and Institutions combined a net buy of 2.8 billion baht, coupled with 416 million baht from Proprietary Trading to buoy SET by 9.5 points.

– OPEC+ to discuss extending its current output cuts for 1-3 months.

– China reportedly halted import of U.S. farm products as the country is evaluating the escalated tension between the two countries.

– BOT to step in with extra measures to curb the appreciation of Thai baht.

– VL expected a 10% growth in revenue as sea-transportation businesses started to recover after the easing lockdown.

– SUPER issued a debenture not exceeding 1.5 billion baht with an interest rate of 5.5% to fund for its solar farm investment in Vietnam. 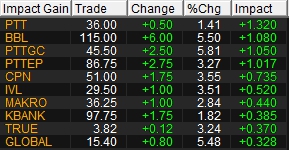