IRPC Public Company Limited (IRPC) has reported its 2Q20 consolidated financial statement through the Stock Exchange of Thailand as follows; 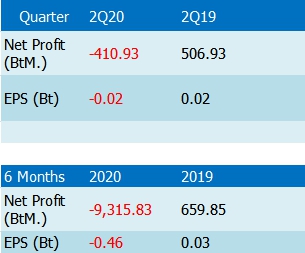 In the second quarter of 2020, IRPC’s net sales were Baht 30,370 million, decreasing 30% from the first quarter of 2020, QoQ, including a 27% decrease in average selling price following the volatility of crude oil price and a 3% decrease in sales volume. The average crude intake was 189,000 barrels per day, similar to those of 1Q20.

In addition, the company recorded foreign exchange gain on USD loan of Baht 353 million owing to the Thai Baht appreciation against the foreign exchange loss of Baht 500 million in the previous period. There was an unrealized gain from oil hedging of Baht 359 million compared to an unrealized loss from oil hedging of Baht 993 million last quarter.