BCPG Public Company Limited (BCPG) has reported its 3Q20 consolidated financial statement through the Stock Exchange of Thailand as follows; 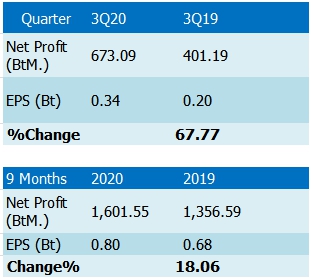 BCPG reported a net profit of 673 million baht, increased 67.77% when compared to the same period of last year.

1) Full high season quarter recognition of 2 hydropower plants in Lao PDR including “Nam San 3A” and Nam San 3B” for the first time since acquisition.

2) New acquisition of Solar power plant in Thailand, “RPV”, of 4 projects with total contracted of 20.0 MW which have been recognized since 11 August 2020.

3) The increase of share profit from investment in associates from geothermal power plant in Indonesia.

BCPG booked FX gain of THB 58.0 million, mainly come from different in FX translation of THB loan under subsidiary “BCPG Indochina Co., Ltd” that used USD as a functional currency which resulted in lower loan amount after the weakening of THB against foreign currency in the quarter.