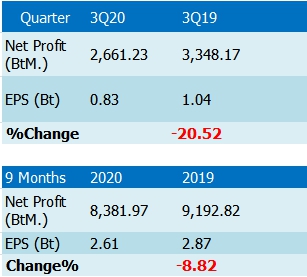 INTUCH reported a net profit of 2,661 million baht for the quarter, decreased 20.52% compared to the same period last year. The decrease was mainly due to a lower contribution from the local wireless telecommunication business, as a result of a drop in revenue, a rise in depreciation & amortization and a foreign exchange loss, although this was partially offset by a decrease in SG&A.

However, the contribution from the satellite & international businesses rose YoY, but dropped QoQ, as a result of the share of compensation included in other income totaling 621 million baht (after a prepaid expense was written off).