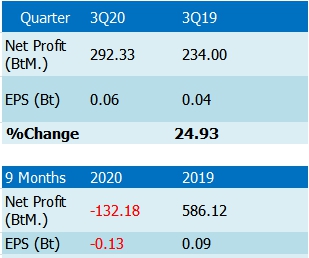 ANAN reported a net profit of 292 million baht, increased 24.93% compared to the same period last year. The increase was mainly due to a decrease in selling and administration expenses of 329.0 million baht or 43.6%, and partly from other incomes which mainly were from selling rental areas in condominiums close to mass transit networks in 3Q20.

Total revenue in the third quarter of 2020 accounted for 1,369.7 million baht, decreasing 1,307.3 million baht or 48.8% YoY, due mainly to a decline in sales of real estate revenue came from ANAN. The company presently has been developing projects through joint venture companies which was recognized in statement of comprehensive income under the share of profit (loss) from investments in joint ventures.

However, there were five new condominium projects which just finished and started to transfer at the end of 3Q20, which were Ashton Asoke-Rama9, Ideo Q Sukhumvit 36, Ideo Mobi Sukhumvit Eastpoint, Ideo Ratchada-Sutthisan, and Elio Sathorn-Wutthakat. The transfer numbers of those five projects were expected to increase continuously in 4Q20.