Bangkok Expressway and Metro Public Company Limited (BEM) has reported its 3Q20 consolidated financial statement through the Stock Exchange of Thailand as follows; 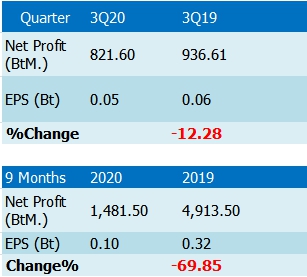 BEM reported a net profit of 821 million baht in 3Q20, decreased 12.28% compared to the same period of last year. The decrease was mainly from the decrease in revenue from the effect of COVID-19 outbreak in the year 2020 whereas there was an increase in expenses related to the operation of the MRT Blue Line which was operated in full commercial service on March 30, 2020.

However, the profit in the third quarter increased 440.8% when compared to a net profit of 152 million baht in the previous quarter as Thailand gradually recovered from the pandemic.