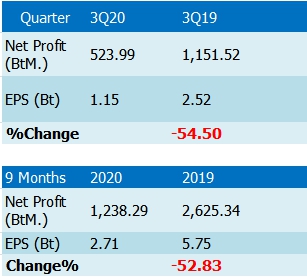 NOBEL reported a normalized total revenue in 3Q20 at 3,389 million baht, increased 308% compared to an amount of 830 million baht in 3Q19. The increase was mainly due to higher recognition ownership transfer from completed condominium and horizontal projects, coupled with higher other income from contract forfeiture and management fee from joint ventures.

Meanwhile, normalized net income for the quarter was 524 million baht, increased more than 182 times compared to an amount of 2.9 million baht in 3Q19.

However, net income in 3Q20 was at 524 million baht, decreased 54.5% compared to the same period last year due to an extraordinary item from sale of land for future development in 3Q19 while income of 3Q20 came from normal business operations only.

Moreover, the company also announced the resolution of its Board of Directors on November 12, 2020, to approve a par split from 3 baht to 1 baht to increase the trading liquidity for investors. The Board also approved the issuance warrants to purchase ordinary shares of the company for free to the existing shareholders at a ratio of 4 existing ordinary shares to 1 unit of warrant in the amount of not exceeding 342,353,381 units with the exercise price at 8.00 baht.