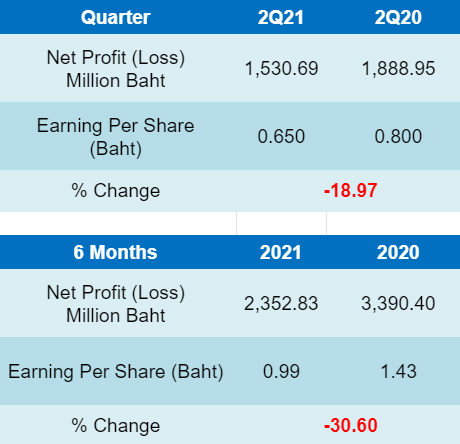 For the second quarter of 2021, DTAC reported a net profit amounting to THB 1,531 million, a 18.97% decline compared to the same period last year, but increased 86.20% quarter-on-quarter, from EBITDA increased.

EBITDA (before other items) in 2Q21 amounted to THB 8,065million. The figure showed an increase of 7.9% QoQ due to stabilizing service revenue, well-managed cost of services and SG&A expenses and one-time effects in network OPEX of approximately 150 million and one-time gain from negotiation with vendor booked as part of device cost reduction of approximately THB 180 million.The slight decrease of 0.5% YoY was a result of soft top line development from ongoing pandemic impact offset by well-managed costs. EBITDA margin  (excluding revenues from CAT lease agreements and TOT network rental) was 49.0% in Q221, increasing from 43.9% in Q121.

At the end of the first half of this year, total subscriber base stood at 19.2 million, increasing 164k from the end of March. The increase came from both prepaid and postpaid. Prepaid  subscriber increased 125k QoQ to 13.06 million, reflecting DTAC’s strong execution of Thai  mass-focused strategy and positive momentum from the rapid low-band network deployment while postpaid subscriber base stood at 6.19 million, reflecting an ongoing increase of 39k from 1Q21.