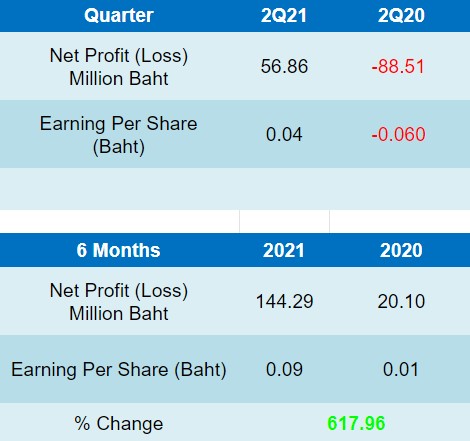 BJCHI’s net profit in 2Q21 was at 56.9 million baht as compared with the loss in 2Q20 at 88.5 million baht due largely to the absence of major cost from a project, FX gain and SG&A reduction.

Contracted Revenue (excluding other revenue) was 459.9 million baht, decreasing by 9.0% from 505.1 million baht in 2Q20. The Contract Revenue decreased because there were less executed projects as compared to the same period of last year.

Contracted Costs in 2Q21 were 373.4 million baht, representing a decrease by 21.0% from the same period of last year at 472.7 million baht. The decrease in Contracted Costs was in line with decreased project activities while there is no major cost from CRISP. Selling, General and Administrative Expenses (SG&A) were 34.3 million baht, decreasing by 30.6% from 2Q20 which was 49.4 million baht due to the ongoing cost control policy.

In addition, ongoing THB depreciation made the company recognize FX gain by 28.9 million baht as compared with the loss in 2Q2020 at 83.5 million baht. The depreciation of THB against the US dollar happened due to foreign capital outflow from Thailand.