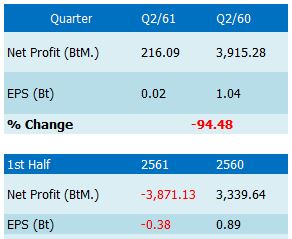 Later, in April 2018, PACE together with PP1 and PP3 which are its subsidiaries (former as joint ventures) entered into Disposition of assets with King Power MahaNakhon Co., Ltd. in order to dispose its subsidiaries’ assets, comprising of: hotel, Observation Deck, and Retail Cube Building to KPM with the total value of not exceeding 14,000 million baht.

To do so, PACE was required to invest additional capital to complete the construction in the amount of not exceeding 875 million baht. The main reason was caused by the crisis of lack of confidence in the bond market since 3Q17 which affected PACE’s ability to prepare the additional fund to complete the construction of its projects as planned. This included the obligation to repay current portion of debentures as well as bill of exchange of more than 3,000 million baht. Accordingly, PACE decided to dispose its assets in order to use that cash flow to solve its debt.

Consequently, PACE recognized the adjustment between the fair value of the investment from the independent financial advisory and the actual value of the investment, and recorded loss from investments in joint ventures in the amount of (285) million baht, and 3,115 million baht in PACE’s Statement of Comprehensive Income for the three-month period ended March 31, 2018 and the six-month period end June 30, 2018, respectively.

In 2Q17, PACE received a notification from The Securities and Exchange Commission (SEC) indicated PACE to clarify the actual value of the investment on November 16, 2017. To complete the process, PACE engaged the second independent financial advisory firm to remeasure fair value of PP1 and PP3 investments once more by using Income Approach and Black-Scholes option.

The results of the evaluation was PACE acknowledged the loss of actual value of the investment, which consequenced to the second quarter of 2017’s financial statements, and recorded a profit/loss for 7,113 million baht. The aforementioned statement shown that PACE had recorded a net profit of 3,915 million baht.