The U.S. Energy Information Administration (EIA) expects that the Organization of the Petroleum Exporting Countries (OPEC) will rise to about $736 billion in 2018, almost one-third from the total revenue at $567 billion in 2017. The rise in revenue is based on forecasts of global oil prices and OPEC production levels, despite the U.S. sanction in Iran and Venezuela. 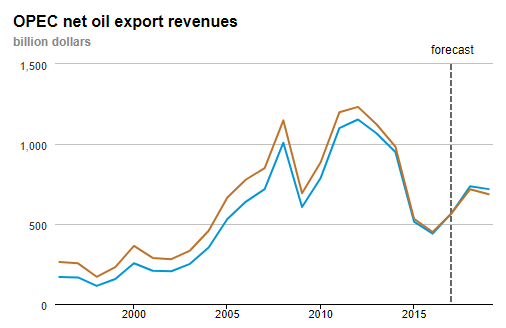 For 2019, OPEC revenues are expected to be $719 billion, as a result of lower forecast crude oil prices. Slightly lower OPEC production and exports also contribute to the decline in expected earnings. Still, the revenues are well below the (nominal) record of $1.23 trillion set in 2012.