– SET closed at 1,631.40 points, jumped 27.37 points or 1.71% with a trading value of THB 66 billion. Maybank Kim Eng stated that the rebound of SET Index was due to the response of the new stimulus plan from the government, believing to be a short-term positive factor amid negativity from the global market. It had been expected that there is a chance of Fed to cut policy rate again next month.

– SET lifted C sign off 7UP after shareholders’ equity increased to 50%.

– JAS approved the disposal of optical fiber cables worth ฿38bn to JASIF.

– TEAMG signed an MOU with “Kingdom Group” on business development of smart cities.

– NOK urged to solve its problem with over and unnecessary expenses while aiming to sell tickets through SE-ED.

– AMA upgraded its target revenue in 2019 to THB 2 billion after the number of transportation increased. 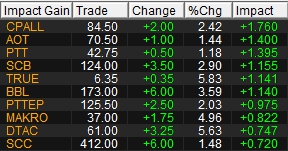