/ Kaohoon International / A Stock Loss of ฿1.3bn Drags TOP from a Gainer to Book a Net Loss of ฿683mn 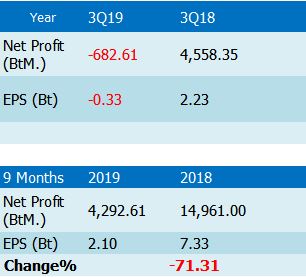 GIM excluding stock gain/ (loss) declined by 2.1 US$/bbl from lower aromatics spreads because of surplus supply in the market following a start-up of a new Chinese aromatic plant in 2Q19 as well as lower GRM because of higher Cude Premium.