Under the new national security law, Hong Kong has made its first arrest on a man for holding a HKIndependence flag.

Hong Kong Police Force tweeted that a man was arrested for holding a #HKIndependence flag in #CausewayBay, Hong Kong, violating the #NationalSecurityLaw. This is the first arrest made since the law has come into force. 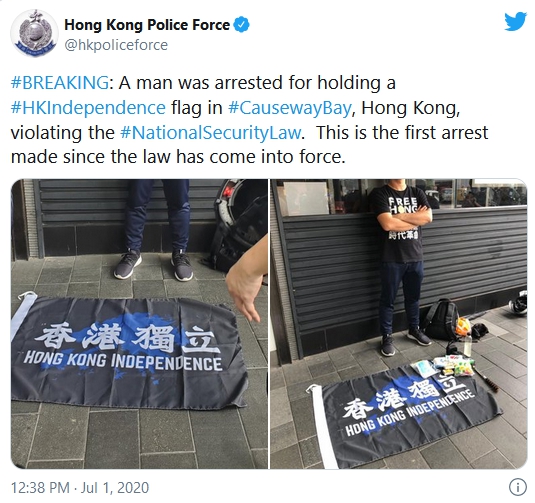 The new legislation stated that a person who acts with a view to “undermining national unification” of Hong Kong could face a punishment of up to lifetime in prison.

On Tuesday, China’s parliament on Tuesday has unanimously passed national security legislation for Hong Kong prohibiting acts of secession, subversion of state power, terrorism activities and collusion with foreign or external forces to endanger national security, with expected to carry a maximum penalty of life imprisonment.

Meanwhile, the United States on Monday begun to halt Hong Kong’s special status, the move was in retaliation for Beijing’s preparation to impose national security law.

The U.S. Commerce Department said it was suspending “preferential treatment to Hong Kong over China, including the availability of export license exceptions,” adding that further actions to eliminate Hong Kong’s exclusive trading status would be evaluated.

“We urge Beijing to immediately reverse course and fulfill the promises it has made to the people of Hong Kong and the world,” it said.