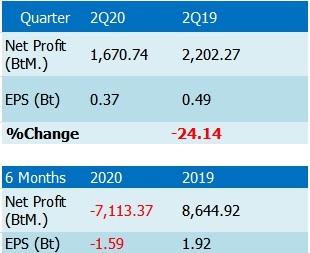 In 2Q20, PTTGC had total sales revenue at Baht 69,271 million, decreased by 26% from 1Q20 and decreased by 35% from 2Q19. The sales volume increased due to the full utilization of Olefins and Polymers plants after the planned maintenance shutdown in the previous quarter but affected by soft Petroleum and Petrochemical prices led by concerns on the global economy from Covid-19 outbreak.

Moreover, fixed overhead and SG&A expenses decreased from both 1Q20 and 2Q19 due to an intensive expenses control program, employee benefits expense at Baht 784 million in 2Q19, and a decrease in lease expenses but higher depreciation expense after the implementation of TFRS 16 on January 1, 2020.