/ Kaohoon International / BCPG Reports a Profit of ฿354M in 2Q, Recording 14% Increase of Revenue for the Quarter

BCPG Public Company Limited (BCPG) has reported its 2Q20 consolidated financial statement through the Stock Exchange of Thailand as follows; 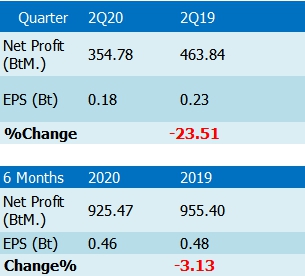 On a QoQ basis, total revenue was increased by 9.4%, mainly due to a gradually entering high season in late of 2Q20 and the first fully quarter revenue recognition from hydropower plant “Nam San 3B”.

In 2Q20, the group of companies booked FX losses of THB 98.4 million, mainly coming from different FX translation of THB loan under subsidiary “BCPG Indochina Co., Ltd” that used USD as a functional currency. Then a loss from translation occurred after strengthening of THB against foreign currency in 2Q20. While in 2Q19 and 1Q20, there were FX gains booked at THB 31.2 million and THB 325.1 million respectively.