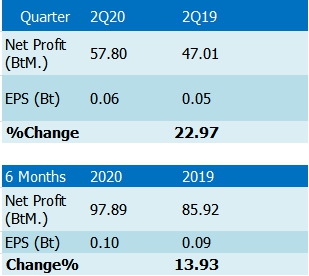 The company stated that the increase was mainly due to the recognition of the high-speed internet service in remote area (USO) phase 1 and 2, and service income from data center space.

Moreover, the well-managed cost reduction plan resulted in a lower expenses to record at 389 million baht, dropped by 26.6% compared to the amount of 530 million baht.

The company also stated that it currently holds 4,521.92 million baht worth of backlog, emphasising ITEL’s promising profit in 2020 and long-term sustainable growth.