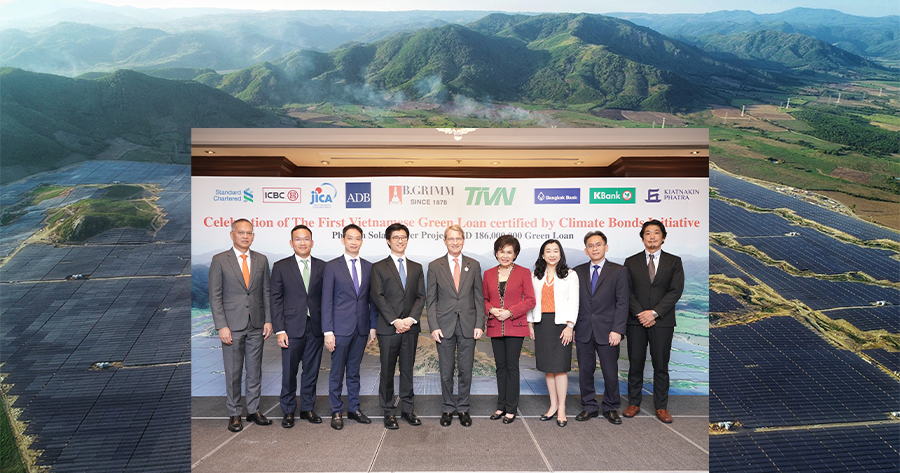 The syndicated financing for the 257-megawatt (MW) solar power scheme in Phu Yen Province represents the first green loan in Asia and the Pacific to be certified by the Climate Bonds Initiative, part of an independent global environmental movement.

The financing has in particular further cemented the long-term partnership between BGRIM and ADB which is one of the major financiers of the Phu Yen scheme. It also underscores ADB’s confidence in the growth potential of BGRIM as an emerging major private power investor in Southeast Asia.

The group of commercial banks which agreed to provide a total of $148.8 million to the project includes Bangkok Bank, Kasikorn Bank, Kiatnakin Bank, Industrial and Commercial Bank of China (ICBC) from China and Standard Chartered Bank. The other lender is the Leading Asia’s Private Infrastructure Fund (LEAP) which contributed a $9.3 million financing.

The Phu Yen financing has so far become one of the largest such loans yet mobilised in Vietnam.

BGRIM Chairman Harald Link said the loan accord marks another successful milestone of the company which is pleased and grateful to all lenders for the financial support.

The Phu Yet solar farm has already started supplying electricity to the Electricity of Vietnam (EVN) under a 20-year contract at a Feed-in-Tariff (FiT) of 9.35 US cent per kilowatt-hour. That means the project has begun to generate revenue to BGRIM and its  Vietnamese partner.

The Phu Yen project serves as a catalyst to promote the use of renewable energy in the socialist republic as well as driving the country’s economic growth, Dr Link stated.

Preeyanart Soontornwata, Chief Executive Officer of BGRIM, said the green loan showed that the company has once again pioneered a new form of financial innovation that focuses on the development of clean energy.

The green loan which was concluded this time reflects BGRIM’s adoption of the best global practice to support sustainable energy development in Vietnam.

Yet it helps fostering a green loan market and promoting green transactions which are in line with BGRIM’s sustainability policy in conducting business according to international standards, she noted.

Jackie B. Surtani, Infrastructure Finance Division Director for East Asia, Southeast Asia, and the Pacific at ADB’s Private Sector Operations Department, said: “ADB is committed to supporting BGRIM, one of our most valued clients, with its long-term expansion into Vietnam and its important work in renewable energy. We’re also excited to work for the first time with TTVN.

The Phu Yen solar energy project is the largest in Vietnam and one of the largest power plants in Southeast Asia.

The facility will save 123,000 tonnes of carbon dioxide per year and the power plant will support the electricity needs of Quang Ngai and Nha Trang as well as the surrounding areas in the region, one of Vietnam’s major tourism hubs.