– SET closed at 1670.41 points, increased by 5.68 points or 0.34% with a trading value of THB 50.10 billion. Analyst from DBS Vickers stated that the index rose higher by a small margin due to a low trading value. However, as the government is forming into a better shape and HM King Rama X had just officially nominated Prayuth Chan-ocha as Thai’s PM, it was expected that foreign investors would invest more in the Thai market.

– Foreign Investors scooped almost THB 3,000 million worth of Thai shares while Individuals advanced to sell the rips as SET Index continued to gain.

– ALL invested THB 585 million in the leasehold rights of shopping center “The New Forum Plaza.”

– GULF gained 1% to post an all-time high at ฿109.0/share while an analyst saw a potential of constant hike.

– PLE issued THB500 million debenture a fixed interest rate of 6.5% per annum, selling to major investors and institutions on 25-27 June 2019.

– SAWAD aimed to issue THB2.5 billion debenture with a fixed interest rate of 4.15% per annum, selling to major investors and institutions on 24-26 June 2019.

– RICHY offered to issue THB 1.1 billion debenture with a fixed interest rate of 6.10% per annum to fund for refinance and business expanding. 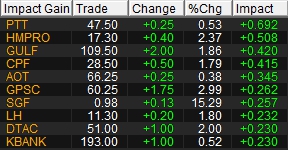