PTT Exploration and Production Public Company Limited (PTTEP) has reported its 2Q19 consolidated financial statement through the Stock Exchange of Thailand as follows: 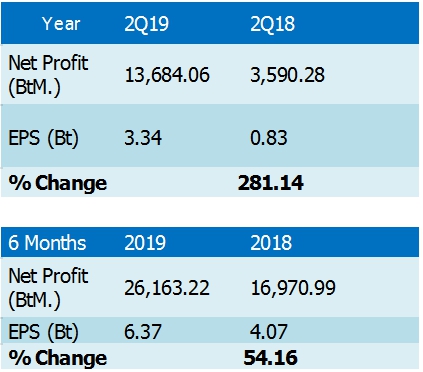 The reason was primarily due to an increase in sales revenue of THB 5,561 million from increases in both average sales volume and selling price, while income taxes expenses and petroleum royalties increase of THB 3,002 million due to an increase in sales revenue. Besides, PTTEP recognised an increase in administrative expenses of THB 1,074 million, mainly due to professional fees, consulting fees and recognition of the additional compensation for the employee being laid off by the employer after serving 20 years or more in accordance with the new Labour Protection Act which was effective in May 5th, 2019.