– SET closed at 1,650.64 points, fell 14.48 points or 0.87% with a trading value of THB 59.24 billion. The SET Index continued to closed in the negative territory due mainly to selling pressure from foreign investors and the order from block trade which impacted on the market to close lower. Moreover, an international factor from the uncertainty of the trade war between the U.S. and China and a domestic factor from the uncertainty of government, all of these have made investors afraid to invest in the market.

– The analyst stated that CBG reported its 2Q2019 profit to increase THB 552 million, increased 163% YoY, 32% QoQ. The analyst said an increase of the 2Q2019 profit when compared to the previous year mainly due to a high GPM and low expenses. Additionally, GPM has also buoyed CBG’s profit growth due to a rise in the utilization rate of CBG’s ACM aluminum can manufacturing and its high season. As a result, 1H2019 profit was accounted at 54% of KS’s estimation for a profit of THB 1.79 billion in 2019. The analyst expected a 2H2019 profit of CBG to increase HoH and YoY but the growth might slow down in terms of YoY due to a high margin in 4Q2018 and a weak revenue growth in the domestic and CLMV markets. However, KS still recommended “BUY” CBG with the target price of ฿48.00/share because KS believed that the value of CBG’s current price is too expensive based on PER 2019 at 40x.
– The analyst recommended “BUY” STEC share with the target price of ฿28.00/share. Furthermore and expected a 2Q2019 profit of STEC to increase THB 499 million, increasing 63.61% YoY and 45.49% QoQ in support of MRT Orange Line and Yellow line project which could operate early. While STEC has a strong backlog of THB98 billion, resulting in a low risk of discontinuing of work when compared to other companies. Additionally, at the end of the year, the government has a bidding project. If the project is MRT Orange Line (Western Line),  the analyst expected that STEC might have a chance to acquire the project. For the 2H2019 outlook, the analyst believed the profit to increase continuously, therefore, the analyst recommended “BUY’ STEC share with the target price of ฿28.00/share.

– BAY invested ฿1.1 billion in “SBF”, the Philippines to grow the bank’s business outside Thailand.

– TMB closed the Mega Deal with TBANK, Ranking at Thai #6 Bank with Total Asset Near ฿2tn.

– TFG reported a rise of 133% of 2Q profit, increasing revenues in swine and feed businesses.

– NOK’s 2Q net loss decreased to ฿675 million after the efficiency of the turnaround plan.

– TOP reported a decline in profit by 88% from stock loss and lower GRM.

– MAKRO reported a rise of 6% of 2Q profit due to the efficiency of financial cost management.

– CHEWA reported a net loss of 86% in 2Q19 from a decrease in real estate sales revenue. 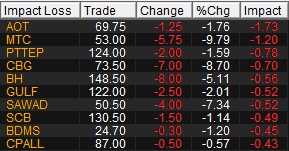