Sansiri Public Company Limited (SIRI) has reported its 2Q19 consolidated financial statement through the Stock Exchange of Thailand as follows: 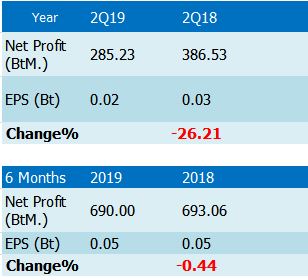 SIRI reported a net profit of THB 285 million, decreased 26% from a net profit of THB 387 million in 2Q18 mainly due to the decline of total revenue in 2Q19 amounted to THB 4,285 million, decreased by 23% from THB 5,542 million in 2Q18. A decrease in total revenue was caused by a 40% decrease in the revenue from project sales, which was the core revenue of SIRI, while revenue from business management and other revenue increased by 30% and 63%, respectively.

In addition, the Board of Directors meeting passed a resolution to pay an interim dividend at ฿0.02/share. The ex-dividend date will be on August 27, 2019 and the payment date will be on September 10, 2019.