TSLA Becomes World No.1 Automaker in Value, Being Safe Assets in the Risk-Asset Market

On Wednesday, June 10, 2020, the share price of Tesla Inc (TSLA) soared above $1,000/share for the first time in its history and overtook Toyota for the world’s most valuable automaker.

For the first time in the history of TSLA, the share price surpassed the $1,000 mark and dethroned Toyota in market capitalization for the world’s most valuable automaker. One might argue that Tesla Inc is more than an automaker as the company is also focusing on various things, but the core revenue proved that TSLA’s main earnings are from selling automotive.

One of the reason that made TSLA to be able to withstand the downturn of car industries might due to its tech-related business, which listed it in the U.S. Nasdaq Composite. As global industries were in a shock from the coronavirus outbreak, investors seem to put their trust in tech-heavy stocks as (kind of) a safe asset in a risk asset after the equity market had seen the lowest point since GFC.

Other than favoritism in the U.S. tech stocks, the surge in TSLA also supported by the CEO, Elon Musk, himself. Musk is like another version of the U.S. President Donald Trump, who relies on Twitter or other social media to connect with the world rather than making public statements or conferences.

Compared to other tech company’s leaders, Musk seems to use social media more than anyone else. His twitter is flooded with work-related and nonwork-related tweets. He once tweeted “I love anime” and got temporarily locked from Twitter, thinking that his account was hacked. Netizens use him as a meme, some hailed him as the new king of the meme after Leonardo DiCaprio. 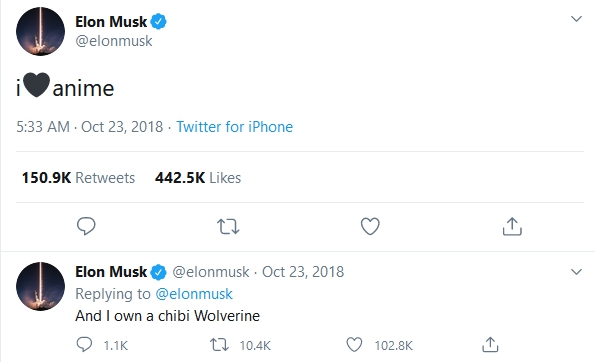 A good use of social media could be a one-good way for advertisement. Musk posted his SpaceX project and people who do not know about his new company and the project become known of it. Meanwhile, posting a successful launch of SpaceX also raised his reputation, leading back to TSLA.

However, one mistake on the internet might be severe to oneself and the company as well. The share price of TSLA once fell 4% on Monday, July 16, 2018, following a rough weekend for its CEO, Elon Musk, who called a diver in a rescue team of Thai soccer team a “pedo”.

Looking at the movement of TSLA, the share has climbed to a very crucial point. Some analysts argued that TSLA was overvalued while giving a “Sell” rating. Meanwhile, some also expected TSLA to reach the $1,500 mark.

Nevertheless, it cannot be denied that TSLA as well as other tech stocks are considered safe assets in the risk assets market.