– SET Index closed at 1,578.93 points, decreased 9.22 points or 0.58% with a trading value of 102 billion baht. The analyst stated that the Thai stock market made a sharp plunge in the afternoon session after seeing a decline in the European market, while Dow Jones Futures pointed to a low opening on Tuesday as tech stocks sell off expected to continue.

The analyst stated that investors in the U.S. market are rotating from growth stocks with relatively high valuations into value stocks that are expecting to gain benefit from the economy reopening and higher inflation.

The analyst expected SET Index to remain volatile during the earnings season and without a new catalyst, giving a support level at 1,560-1,550 points and a resistance level at 1,585 points.

– Individuals took the opportunity during the selloff to buy the dips with a total amount of 5.6 billion baht.

– RAM acquired additional shares of THG to hold a total of nearly 21%.

– STARK stated that the fluctuation in raw material prices such as copper and aluminium would not affect its operations and revenue.

– Despite the plummet in SET, TU closed 6% higher after reporting a satisfying 1Q21 earnings. CNS recommended “BUY” at a target price of Bt20.00 per share.

– KUN reported an increase of 138% in its 1Q21 earnings, mainly contributed by units sold of the new project; Kunalai Preem.

– JR reported a net profit of 54 million baht in 1Q21, increased 421% YoY. The increase was mainly due to the surge in service revenue.

– ACE was declared as the winning bidder of the e-bidding of 2 closed-system municipal solid waste (MSW) disposal (waste to energy) projects.

– Due to lower revenue from domestic and international sales, TKN recorded a decline in 1Q21 earnings by 34%.

– DOD reported a soaring earnings in 1Q21 at 55.13 million baht, increased 97%, from higher sales revenue in the quarter. 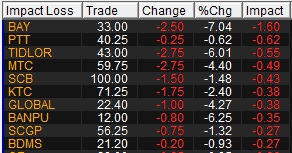