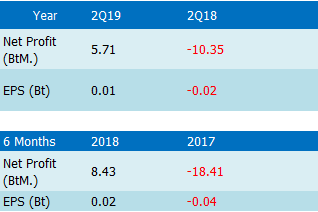 For the Second Quarter 2019, SMART had a net profit of THB 5.714 million, increased by THB 16.067 million increase as opposed to its net loss of THB 10.353 million in the same period of the previous year.

The increase in sales volume and selling price compared to last year resulting in an increase in gross profit, Earnings before interest and tax and net profit for the period of the Company. SMART also had other income from the transportation segment and Gain on Exchange Rate. Moreover, SMART reported a decrease in financial costs by THB 0.092 million or 7.07 percent compared to the same period of the previous year since SMART paid short term loan to the connected person.

However, in 2Q2019 SMART reported an increase in administrative expenses by THB 1.612 million or 21.35 percent compared to the same period of the previous year due to an increase of employees expense and expense caused by improvement of employee benefit according to the new Labor Act which is effective since 5 May 2019.