In the morning on November 12, 2019, the Stock Exchange of Thailand has lifted the “SP” sign from DOD Biotech Public Company Limited (DOD)’s securities after the company had submitted its 3Q19 financial statement. 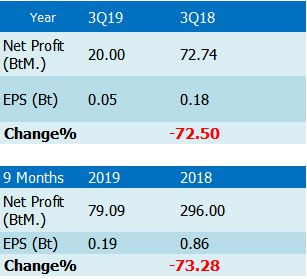 DOD reported a net profit in the quarter at 20.03 million baht, plunged 72.50% when compared to the same quarter of last year. Still, the net profit reported by DOD last night was better than the number that got mistakenly revealed from the SET yesterday morning.