Banpu Public Company Limited (BANPU) has announced its 2Q20 consolidated financial statement through the Stock Exchange of Thailand as follows; 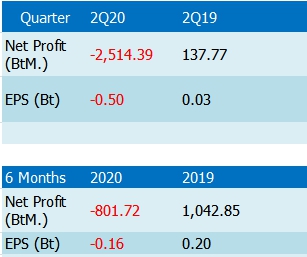 The group performance in 2Q2020 reported net loss at $79 million, decreased by $83 million compared to 2Q2019 mainly from investment restructuring expense in natural gas business of $31 million that was non- cash transaction but affected to the net profit of this quarter, moreover, a decrease of coal and natural gas sales volume and sales price aligned with global economic and also from an appreciate of THB currency against USD currency which resulted in to loss on exchange rate of $21 million.

Administrative expenses reported at $46 million, decreased by 8 million or 15%. This was because the group has focused on cost management to cope with the slowdown of the global economy. Main decrease was from professional fees and others, including domestic and overseas traveling expenses.