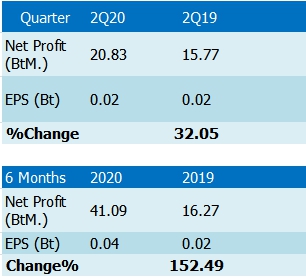 NRF’s business is divided into three main groups: (1) Ethnic Food, which consists of OEM products and products under the company’s brand (2) Plant-Based Food, and (3) Functional Products. The company sells its products to many continents including America, Europe, Asia, Australia, and Africa.

Currently, around 90% of its revenue came from ethnic OEM, while another 8-9% came from its own product, such as plant-based foods. Nevertheless, Mr. Pathomvanich believed that the business model for plant-based food will account for 40% of NRF’s revenue.

NRF’s CEO also stated that the coronavirus pandemic also benefited the company in some way as Americans and Europeans have not been out of the first wave, and NRF’s products will provide consumers an additional option while staying and cooking at home as the company offers a variety cuisine in different nationality as well as ingredients.

Mr. Pathomvanich projected NRF’s sales revenue to reach 3,000 million baht within 3-4 years as he believed in a solid demand from consumers for ethnic products. Moreover, the company also invested in other manufacturers, which would reflect in NRF’s consolidated financial statement. Meanwhile, the newly constructed factories in the U.S. and UK to support flooding demand from consumers will have a significant impact on the company as well.

NRF will kick off its first trading day in the Stock Exchange of Thailand (SET) Index on 9 October, 2020, with an IPO price of ฿4.60/share.