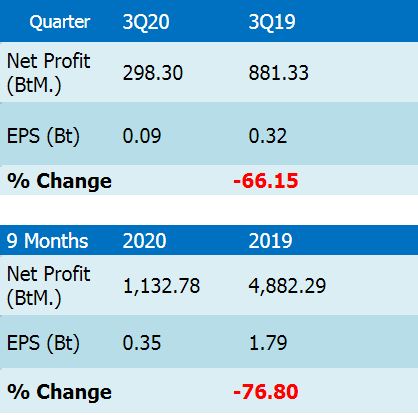 For Q3/2020, BAM has Baht 298 million of net profit, decreased by 66.2% compared to Q3/2019. This results from the Company had received the large amount of payment from significant debtors in Q1/2019, the impact from the spread of COVID-19 affected the debtor’s ability to repay which linked to a lower interest income–part of fully received, the proportionate of interest and operating expenses remain the same as it is the core expense for the business that affect net profit.

As of September 30, 2020, BAM has total assets of Baht 120,224 million, which increased by 3.8% from year-end 2019. This results from the reclassification of financial assets regarding the first time adoption of the current Thai Financial Reporting Standards or TFRS after January 1, 2020 along with the deferred tax assets benefits received after privatization.

BAM has income tax expenses reported in a statement of comprehensive income for the nine months period of Baht 39 million and deferred income taxes from temporary difference income of Baht 168 million.

Meanwhile has tax benefits totaling Baht 4,950 million. However, BAM evaluates that there is the remaining uncertainty about the future utilization of the related benefit because they relate to a large amount of historical data and documents.

Therefore, for reasons of conservations, BAM did not recognize this amount as an asset in the statement of financial position. BAM will gradually recognize these benefits in the future, when the Company decides that the uncertainty has diminished, which will be when it is able to utilize temporary differences as deductions from profit in its annual tax computation, in order to actually decrease its corporate income tax obligation.