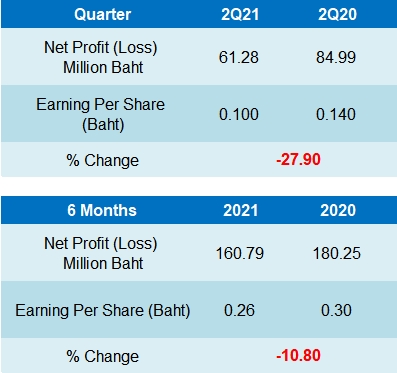 For the six-month period ended June 30, 2021, the company had net profits of 160.04 million baht, a decrease of 20.22 million baht or 11.22% from the same period of the previous year mainly due to financial costs for the six-month period ended June 30, 2021 increased by 21.64 million baht or 27.79% from the last year, especially from the increase in short-term and long-term loans from financial institution including the debentures issued during the period for the purpose of the acquisition of the new business.

As a result of the above reason, the net profit ratio (ROS) for the six-month period ended June 30, 2021 decreased from 19.66% to 17.77%. Moreover, the total expense to total revenue ratio increased from 11.64% to 14.75% since the higher expenses from online advertising that had started from the last year. In the past, the company focused on public relations in the form of organizing events and publishing advertising.