On Monday, December 3, 2018, SET hiked 30.81 points or 1.88% with ฿60.5 billion in total value to close at 1,672.61 points. It was the first trading day after the trade talk between the US President Donald Trump and the Chinese President Xi Jinping on the previous Saturday. The talk was scheduled as a dinner talk between the two leaders and their aids, after the G20 agenda. Apparently, any agreements that Trump and Xi made at the talk were off the record.

What have we known so far? Only a little. We know only that the talk “went very well,” according to the White House Chief Economist, while the Chinese state television said “no additional tariffs will be imposed after January 1, and negotiations between the two sides will continue.”

Somehow, Trump agreed to halt the increment of 25% tariffs on Chinese goods that previously scheduled to take action on January 1, 2019, under the condition that China must start an immediate discussion with the US on Chinese trade practices: intellectual property theft, cyber theft and non-tariff barriers. If there is no progress on structural reform within 90 days, the 25% tariffs will kick in.

Trump also brought more good news for investors on late Sunday night by tweeting that China has agreed to reduce and remove the 40% import tariffs on US cars, emphasizing the better image for his talk with Xi.

For months, the global stock markets that have been more into plunging than increasing finally saw some light. The surges on Monday seemed like one of the happiest days for investors whether it be Wall Street, EU or Asia.

The US president also tweeted more statements on how he and the Chinese prime minister are in good terms, and working their ways to solve the trade tension.

Those were some good signs…..that the president wanted us to see. We cannot deny that we have not seen something similar to this a few months ago.

We saw a good development on denuclearization after Trump and North Korean leader Kim Jong-Un seemed to be on the same page at the Singapore Summit in June 2018. Trump even kept tweeting on how nice and cooperative Kim was. 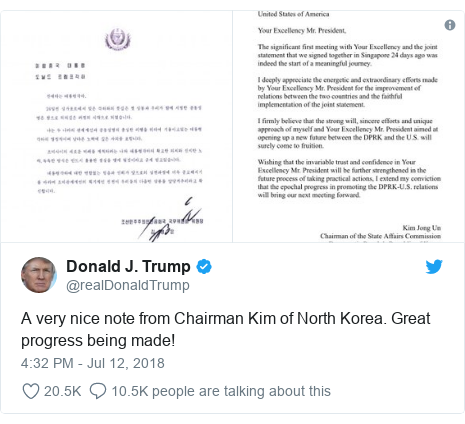 However, after two months that the US and media claimed N. Korea only made little progress on denuclearization, Trump lashed out on N. Korea again. Although the evidence from satellite showed that N. Korea had started to dismantle a key military engine test site at the Sohae Satellite Launching Station, as Kim said he would when he met Trump. US intelligence officials had also said that North Korea may have increased production of fuel for nuclear weapons at multiple secret sites. 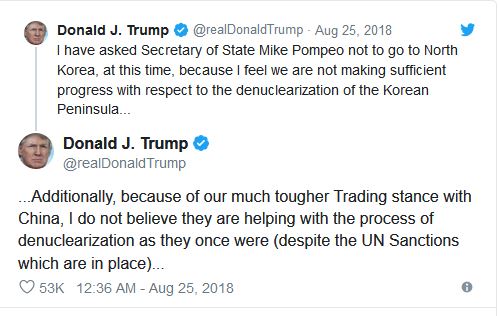 Does this bring an uncertainty to the current situation on trade war? There was no further information regarding the talk besides Trump’s tweet, and we might have been deceived by it.