– CPanel showed a backlog of THB 500 Million, targeting its revenue to increase 30% from the positive sentiment in real estate.

– NOBLE rose as much as 6% as BTS stepped in as the 3rd major shareholders, holding 9.9% of NOBLE’s share. However, the share closed flat at the end of the session.

– CAZ continued to fall as the company could not clarify the source of “income received in advance”. The share fell 15% in five days, making a new low.

– CRANE hit the ceiling at 29.14%, analysts anticipated short-term speculation after a long laggard.

– THAI announced to issue 7 series of debentures for a total of not exceeding THB 10 billion with a maturity of 1-15 years, offering to major investors and institutions.

– SET closed at 1,667.15 points, sank 6.17 points or 0.37% with a trading value of THB 40.8 billion. Sell pressure from blue-chip shares plunged the market in today’s session while investors were still waiting to see the financial statement which should be released in a few days from now. 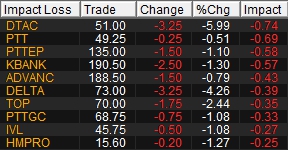