– SET closed at 1,727.58 points, plunged 7.52 points or 0.43% with a trading value of THB 59.26 billion. The index traded mostly in a negative territory from the probability of Fed to cut the interest rate by 25 basis points instead of 50 points.
Meanwhile, China debuted its new Nasdaq-style technology board known as STAR on the Shanghai Stock Exchange which skyrocketed on their first day despite a plummet of 1.27% from SSEC. The new board could also potentially snatch foreign investors from the Thai market as well. SET’s sudden plunge in the afternoon session was due to the freshly announced June exports which recorded a decline of four-month straight while imports also sank by 9.44%.

– A huge selloff at a total of THB 3.54 billion from Institutions plunged SET by 7.5 points while Foreign Investors continued to invest in the Thai market with a total value of THB 2.18 billion.

– JAS closed the day at THB 7.60/share, decreased THB 0.25 or 3.18%. During the day, JAS’s share price slid 2.5% amid rumors of discussing potential cooperation with Korean telco firm, while the highest of share price reached THB 8.00/share and the lowest was THB 7.60/share with a trading value of THB 1,054 million.

– ALL closed the day at THB 4.94/share, increased THB0.06 or 1.23%. During the session, the highest of ALL’s share price wasTHB 5.05/share and the lowest was THB 4.90/share with a trading value of THB 73 million. However, ALL’s share price has already surged above IPO at ฿5.05, therefore, analyst recommended “Speculation” with a resistance level at ฿5.20.

– SPCG cooperated with 3 Alliances to sign MOU for solar roof business in Thailand. 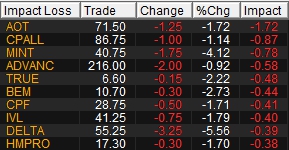