The Thai economy continued to contract throughout July and August 2021 compared to second quarter due to resurgence of COVID-19 leading to lockdown restrictions in 29 dark-red provinces which accounts to 77% of the GDP. Given the rationale Thailand being a bank-based economy along with the banking sector highly correlating with the economy, performance of the banking sector has been under continued pressure since last year.

Given the staggering economic conditions banks had set aside sizeable amount of provision on their books since last year. However, earnings should see significant improvement in third quarter with some banks lowering their provisions. Closure of bank branches in the malls not only affected core business, non-core segments such as brokerage of mutual funds and bancassurance also came under pressure since the preferred channel for such transactions are face-to-face.

Among the top tier banks Krungthai Bank (KTB) started off the announcement of the current earnings season with 3Q21 net profit decreased by 15.9% to 5.06 billion baht translating to an increase of 65.4% YoY. Recognition of lower provision compared to last year led to improvement in earnings compared to the same quarter last year. However, the disappointing QoQ earning growth is attributed to higher operating expenses by 7% and higher impairment loss on foreclosed assets.

In line with the consensus Bank of Ayudhya (BAY) reported most disappointing QoQ and YoY earning among top tier banks, with net profit standing at 6.41 billion baht a drop by 54.1% and increase by 3.5% YoY. BAY’s management pointed towards large decrease in non-interest income and absence of gain from IPO of TIDLOR in 2Q21. However, earnings are expected to improve significantly in 4Q21 with the assumption of higher loan growth as the economic activities picks up.

Kasikornbank (KBANK) lead the scoreboard in this earrings season with QoQ earnings inched up by 4.7% to 8.63 billion baht and an improvement of 29.2% YoY. According to the bank’s earnings report, the quarterly performance is mainly driven by non-interest income accountable to loan growth by 3.45% and slight decrease in operating expenses. However, the bank has set aside higher provision than last quarter by 4.53%.

The Siam Commercial Bank (SCB) on Thursday reported net profit of 8.82 billion baht which is flat compared to last quarter and inched up by 90% compared to same quarter last year. The robust YoY growth is attributed to 24.3% increase in non-interest income on YoY basis driven by wealth, insurance brokerage, gain on investment and gain on sale of non-performing assets.

Net earnings of Tisco Financial Group (TISCO) contracted relatively lower by 6% QoQ and 3% YoY booking net earnings of 1.56 billion baht. Earnings inched down mainly due to contraction in loan portfolio both quarterly and yearly basis along with lower core income amid strict lockdown measures during July-August.

LH Financial Group (LHFG) saw significant improvement in both net interest income and net non-interest income inching up by 18.2% and 17.2% this quarter respectively. The bank booked earning of 0.72 billion baht this quarter up by 50.5% QoQ and 37.4% YoY.

Top tier bank Bangkok Bank (BBL) are yet to release their earnings. According to consensus, BBL is expected to report 6.10 billion baht down by 0.4% QoQ and 46.3% YoY amid lower fees from non-core business such as mutual funds and insurance brokerage due to closure of malls. Lower quarterly earnings are also expected to be driver by higher operating expenses, according to Capital Nomura Securities. The broker also added lower provision on yearly basis would likely book higher YoY figures. 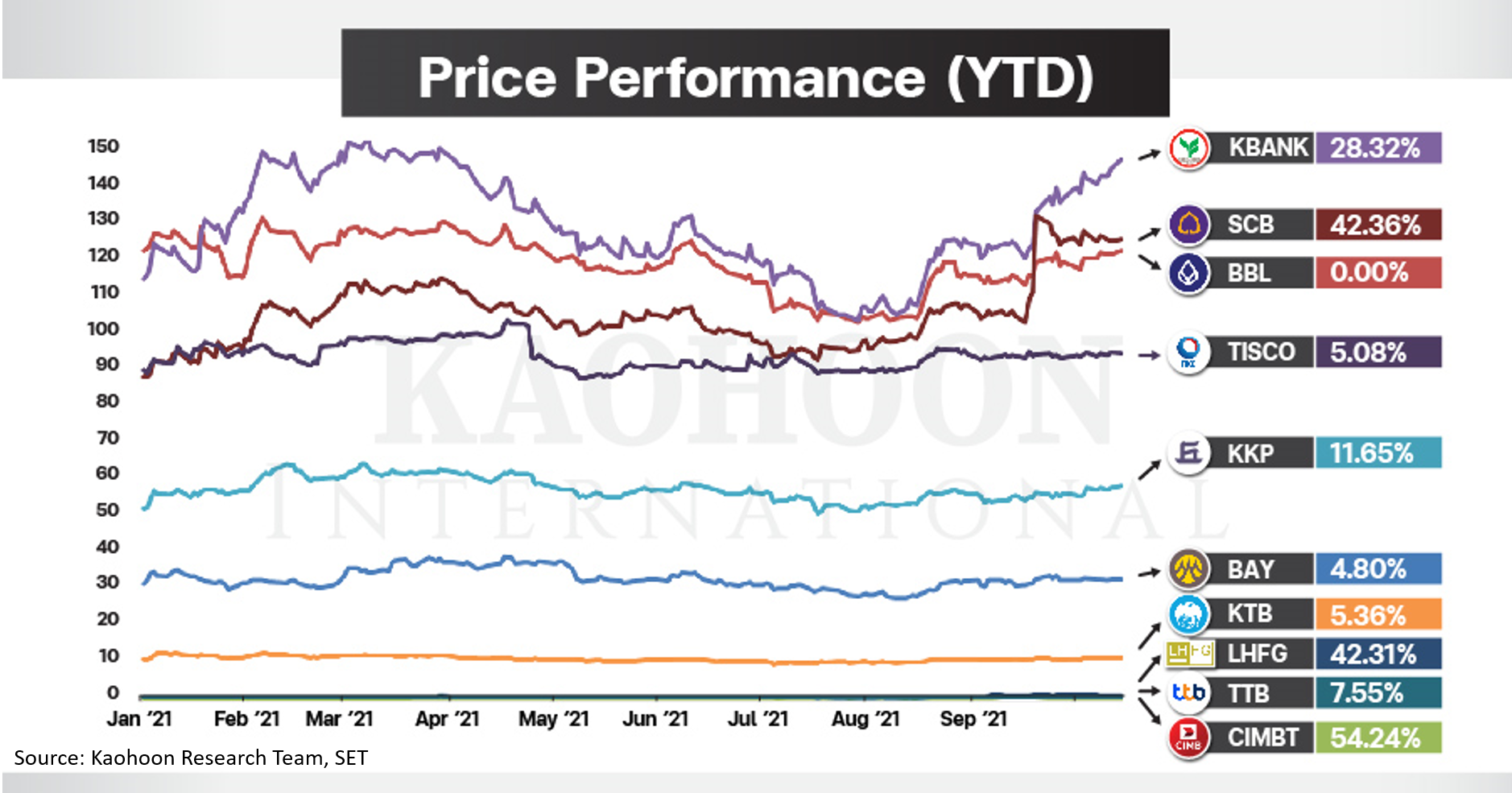