– SET closed at  1,633.84 points, decreased by 6.29 points or 0.38% with a trading value of THB 53,92 billion. The trade war between the U.S. and China heated up after China retaliated with imposing 25% tax of the U.S. on $60 billion worth of the U.S. products. The move caused Asia markets to plunge even further, but European markets opened higher today as analysts claimed investors began to mitigate the sharp downturn caused by the dispute.

– SUPER planed to divest all shares of “MNY,” lost “Nongkhai” power plant along the way.

– MINT’s profit plunged 66% to ฿583M, due to the core earnings loss from NH hotel group. 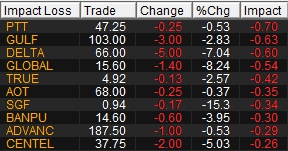