PTT Public Company Limited (PTT) has announced its 2Q21 consolidated financial statement through the Stock Exchange of Thailand as follows; 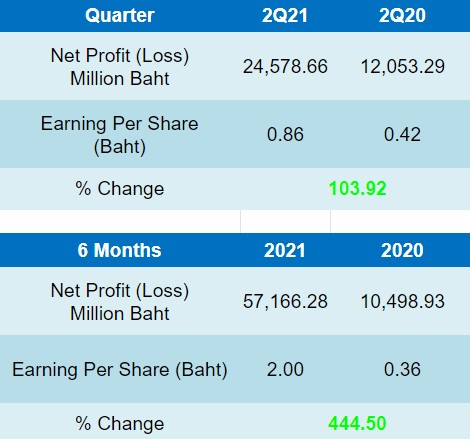 Net income of PTT in 2Q2021 was reported at Baht 24,578 million, decreased by Baht 8,010 million or 24.6% from 1Q2021, but increased Baht 12,525 million or 104% from 2Q2021. This was mainly from the non-recurring items (PTT’s portion) including PTT Global Chemical Public Company Limited (PTTGC)’s impairment loss from JV of around Baht 1,500 million in 2Q2021. While, in 1Q2021, there were PTTEP’s recognition of gain on bargain purchase in Oman Block 61 approximately Baht 7,000 million offset with the partial write-off of exploration and evaluation assets of the exploration project in Brazil approximately Baht 2,900 million. Besides, the loss on derivatives increased.

PTT reported EBITDA increased by Baht 58,958 million or more than 100.0% when compared to the second quarter of year 2020. This was mainly from the Petrochemical and Refining businesses especially, the Petrochemical business which had the performance improved significantly from the increase of both olefins and aromatics products spread.

Besides, the Refining business’s performance enhanced from higher stock gain, approximately by Baht 7,000 million compared to 2Q2020, as a result of the increase in crude oil price from the end of 1Q2021 according to better COVID-19 situation; even though, gross refining margin excluding stock gain/(loss) (Market GRM) remained at US$ 1.6 per barrel.

Consequently, gross refining margin including stock gain/(loss) (Accounting GRM) increased from loss US$ 1.6 per barrel in 2Q2020 to gain US$ 4.4 per barrel in 2Q2021. Exploration and Production business’s performance increased according to the higher average sales volume mainly from the acquisition of Oman Block 61 as aforementioned and the rise of average selling prices.

Additionally, the performance of Oil business increased mainly from higher gross margin as a result of the increase in average selling prices and the higher sales volume, especially aviation fuels according to the stricter lockdown measures in 2Q2020 compared to 2Q2021.

Meanwhile, net income in 1H2021 was Baht 57,166 million, an increase of Baht 46,667 million or more than 100.0% from 1H2020 in line with the higher EBITDA. In addition, there was the recognition of non-recurring items (PTT’s portion) mainly from PTTEP’s gain on bargain purchase in Oman Block 61.