AP (Thailand) Public Company Limited (AP) announced its success amid uncertainty from the current global crisis. Growth continued since the beginning of the year and total revenues in the first nine months of 2020 rose to record THB 35,180 million.

In 9M20, the net profit at THB 3,280 million was higher than the whole 2019, attributable to a timely swap in the company’s product portfolio, an increased presence of its low-rise products and a real demand for condominiums purchased to live in.

For the third quarter, LIFE Ladprao and LIFE Asoke – Rama 9 were highlighted as the key success factor contributing to a sharp increase in revenues, while low DE at 0.8 times reflects a strong corporate stability.

The firm has also increased its land purchase budget for the whole year to THB 9,500 million as it looks to grab pieces of land for its closed out low-rise portfolio. With the market showing promising demand for condominiums in the year’s final stretch, the company has decided to launch ASPIRE Erawan Prime worth THB 3,200 million to wrap up the year and bring the total number of new developments launched in 2020 to 40 projects worth THB 45,020 million.

Mr. Anuphong Assavabhokhin, Chief Executive Officer of AP, said “it has been over 10 months that the world has been facing the COVID-19 crisis with no improvement in sight. According to Mr. Anuphong, the crisis is huge and unlike any other in the past. The only way to survive is through resilience and careful management of cash flow – two things which allowed the company to record revenue growth every quarter amid the crisis.

In the first nine months, AP had record growth with total revenues from low-rise products, condominiums (100% JV) and other businesses standing at THB 35,180 million, up 56% on the same period of last year when its revenues totaled THB 22,510 million. The growth in revenues was attributed to an increase in low-rise developments coupled with a transfer of ownership in condominiums completely built this year, which have continued to be well received.

Particularly in the third quarter, the increase in revenues was partly a result of the continued transfer of ownership in LIFE Ladprao, LIFE Asoke – Rama 9 and ASPIRE Asoke – Ratchada” 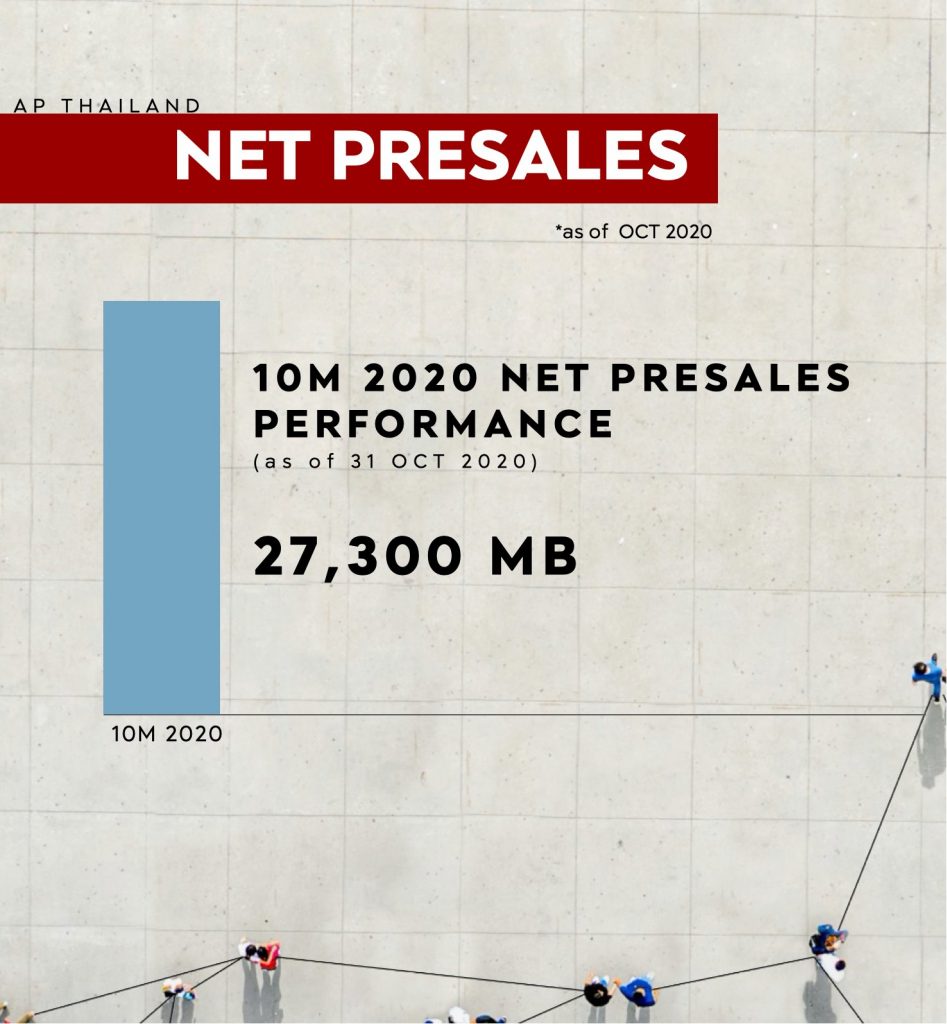 Debt to equity ratio for the nine months of 2020 was at 0.82 times compared to 0.99 times for the same period of last year. It reflects the company’s ability to manage its finances under pressure from the crisis. The company recently increased its land purchase budget to THB 9,500 million after the budget was reduced to THB 4,500 million last April.

The firm is confident that in the last quarter of this year it will be able to reach total revenues of THB 40,550 million as projected with the help of more than 90 low-rise projects being sold as well as 9 condominium projects that have been completed and awaiting transfer of ownership e.g. ASPIRE Asoke – Ratchada, LIFE Ladprao, LIFE Asoke – Rama 9 and Life One Wireless.

“I believe that we will stay with this crisis for the next six months at least. As for the longer term, I don’t know, for the impact of the current crisis is not limited to our country, but is global. The impact has been evident to us all. We have seen a disruption to the way we work, buy and sell, live our lives as well as living behaviour. But the change won’t stop here. A new storm is coming. Corporate leaders need to assess the situation all around. In particular, they need to know the direction in which customers change. How are you going to respond to their emerging needs? We have to get our people prepared and to manage cash flow carefully to get through this crisis together,” Mr. Anuphong added.

For its operation amid the current global crisis this year, in addition to a shift to focusing more on single detached homes and townhomes with a total of 39 low-rise projects worth THB 41,820 million, in the last quarter the company decided to launch also 1 condominium project – Aspire Erawan Prime worth THB 3,200 million in response to promising demand shown once again during the period.

Therefore, in 2020, the company will have launched 40 projects worth THB 45,020 million. In the first ten months of this year ended 31 October, the company had total presales of THB 27,300 million.

In addition for the third quarter of 2020, the company recorded THB 15,219 million in total revenues from low-rise products and condominiums (100% JV) as well as other businesses, an increase of 140% on the same period of 2019 when its revenues totaled THB 6,353 million. Net profit for the quarter stood at THB 1,451 million, up 135% on the third quarter of 2019 when THB 618 million of net profit was posted.